Hydrocodone is a powerful narcotic found in many popular prescription pain medications such as vicodin, lorcet, vicoprofen and xodol, as well as many others. It is also sold as a combination drug, combined with aspirin, ibuprofen, or acetaminophen. While hydrocodone can be quit beneficial to those suffering from chronic pain disorders, it also can be very addictive and comes with a high rate of abuse. Currently, there are more than 200 different pain killers marketed today that contain the drug hydrocodone.

How Does Hydrocodone Work?

Pure hydrocodone is a Schedule II drug, which means that it is highly restrictive and can only be obtained through a valid prescription. However, there are few prescriptions that actually contain pure hydrocodone; most of them only contain small amounts of the drug, mixed with other non-narcotic substances. It works by creating a calm, euphoric state that is similar to the effects of heroin and morphine. It also helps to alleviate pain and is also regarded as an effective anti-cough agent. Sales and productions of this drug have increased exponentially in recent years, making it one of the most popular pain medications on the planet.

Because of the widespread availability of hydrocodone based drugs in the United States, it is currently one of the most widely abused drugs in the country. Nationwide, its use has more than quadrupled over the last 10 years, with hydrocodone abuse soaring more than 500%. Because hydrocodone is a semi-synthetic opioid, it comes with the risk of addiction and dependency.

Depending on each individual, experts believe that hydrocodone addiction can occur within as little as 2-4 weeks after taking high doses of the drug. With continued use, hydrocodone can be habit forming, and can lead to physiological addiction and dependence. The fact is that many individuals who become addicted to hydrocodone are not intending to abuse the drug, but become physically and psychologically dependent just through regular use prescribed by a doctor. This is why most doctors will not prescribe hydrocodone based drugs for an extended period of time without close supervision. 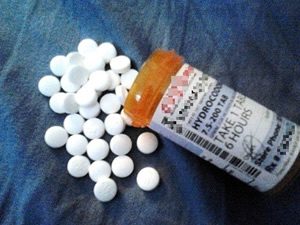