Heroin is widely believed to be one of the most destructive substances in the world. Produced from the poppy plant, heroin is a semi-synthetic form of morphine that is estimated to be one of the most addictive substances ever created. What is most ironic about heroin is that it was first created as a treatment for morphine addiction. However, they soon realized that not only is heroin even more addictive than morphine, but heroin addiction is very difficult to treat and is often associated with severe and painful withdrawal symptoms.

One of the main reasons why heroin is so addictive is because of the way it’s administered. This is because heroin is traditionally injected intravenously into the blood stream. This gives users the most powerful high, and also the most addictive one. The process of injecting heroin also makes it much more dangerous than any other drug. This is because injecting heroin comes with an increased risk of infection, damage to the veins, and overdose. While a mistake of a few milligrams in an oral dose won’t make much of a difference, the same mistake taken intravenously could be life threatening.

Prolonged use of heroin often leads to addiction and physical and psychological dependence. It is said that a physical addiction to heroin can occur in as little as three doses, but a physiological addiction can be developed after the very first time. Once the physical addiction has set in it is very likely that the individual will start to develop a dependency and some type of heroin withdrawal symptom is likely to set in. These can include: 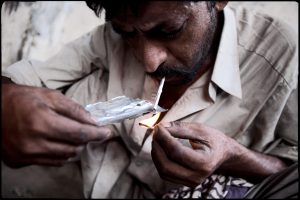 Because heroin withdrawal symptoms can be so difficult to overcome, doctors have created a drug called suboxone to help users cope with these terrible symptoms. Suboxone is an opiate withdrawal pain medication that is used for the treatment of opiate withdrawal symptoms. Suboxone works by stimulating the same receptors in the brain that heroin does, thus giving the patient the relief they need to continue their treatment. Suboxone is generally the first step in a long heroin detox and recovery program that also includes one on one addiction counseling, group therapy, and sober living arrangements. If you or someone you love is addicted to heroin do not hesitate to contact a suboxone doctor today for more information on this cutting edge heroin withdrawal treatment.