Derived from the poppy plant, opiates are thought to be one of the most addicted substances ever created. Opiates are a narcotic drug that contains opium, or a synthetic derivative of opium, and is used to treat mild to moderate pain. While opiates are found in many of today’s common painkillers, they can also be extremely addictive and are required to be taken under the supervision of a medical doctor. However, because opiate painkillers are such a common treatment for pain and are so widespread, they are also one of the most abused substances in the United States, behind marijuana and alcohol.

Opiate addiction, especially towards opioid based prescription pills, has become a major problem in the United States and claims hundreds of lives every year. Not only is the abuse of powerful pain killers like oxycontin, oxycodone, vicodin and percocet at record levels, but the abuse of heroin and morphine are as popular as they’ve been since the 1970’s. Opiate abuse is so rampant that is starting to become a major health concern in the United States with annual treatment costs in the billions of dollars.

The main reason why opiates are so addictive is because of the profound way it reacts with the nerve cells in the brain. After prolonged use of opiates, the nerve cells in the brain start to become so dependent on the opioids, that it can no longer produce the right amount of endorphins which your body naturally uses to treat pain. The degeneration of these cells can cause a physical dependence to the opiate based drug, which can result in a nasty side effect of opiate abuse commonly known as withdrawal syndrome.

After a person has become physically dependent on opiates, it is likely they will develop some type of moderate to severe withdrawal symptoms if they have not recently taken the drug. Once the opiates are no longer in their system they will immediately begin to feel withdrawal symptoms such as muscle pain, nausea, vomiting, flu-like symptoms, sweating, excessive yawning, goose bumps, insomnia, and various other flu-like symptoms. While opiate withdrawal is not considered to be life threatening, it can be dangerous for individuals already in a poor state of health. Opiate withdrawal symptoms can even be so severe that individuals won’t sleep for weeks at a time, and will continue using opiates, even if they wholeheartedly want to quit, just to avoid these symptoms altogether. 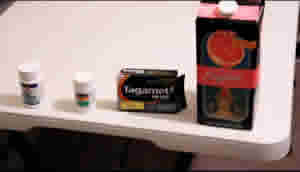