Fentanyl is an opioid pain medication that is used to only treat the severest cases of pain. Fentanyl is exponentially more potent than Morphine and is generally only used in operating rooms and intensive care units, or as a means of treating severe pain, usually in cancer patients. Fentanyl is either administered either in lozenge form or through a skin patch, which allows for an extended release of the medication into the bloodstream. Fentanyl is sometimes given to patients with chronic pain issues who have demonstrated a physical tolerance to other opiates. In the prescription form, Fentanyl is also known as Actiq, Sublimaze, and the Duragesic patch.

The powerful painkiller Fentanyl was originally synthesized in 1959 by chemist Paul Janssen, under the name of his new company, Janssen Pharmaceutical. Fentanyl was then marketed as a drug called Sublimaze, and was mainly used as an intravenous anesthetic in operating rooms for surgery. It wasn’t until the mid-1990’s until Janssen Pharmaceutical created its newest Fentanyl product and most popular today, the Duragesic patch. These state of the art patches release a steady flow of Fentanyl over a period of 48 to 72 hours, offering immediate and long lasting pain relief. However, as this powerful drug became more widely available over the first decade of the 21st century, addiction and abuse rates quickly began to skyrocket.

While Fentanyl is widely regarded as a very effective pain reliever, it should never be taken unless it is prescribed by a board certified physician. Fentanyl abuse can have a variety of common side effects including:

Fentanyl Abuse can also lead to some very serious side effects including:

If you are currently experiencing any of these severe side effects from taking Fentanyl you need to go to the emergency room immediately. 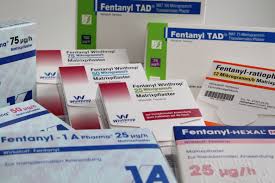 Fentanyl abuse is growing in popularity all over the country, especially among teens and young adults. Estimated to be about 81 times more potent than morphine, Fentanyl can be a very dangerous drug if not taken properly. When abused, Fentanyl can put you at a high risk for addiction, dependency, and possible overdose. Hundreds of deaths every year are linked to Fentanyl abuse, as well as individual’s misusing the Fentanyl patch, also known by its brand name, the Duragesic patch. Fentanyl abuse can also lead to moderate to severe withdrawal effects that could last for weeks at a time.

If your teen or young adult is currently abusing Fentanyl than there’s no time to wait. Explain to them about the serious dangers involved with abusing this drug and go seek professional drug treatment right away. Call us at (866) 531-4569 for more information.