Adderall is a popular and widely used drug that’s primarily prescribed to treat cases of ADHD in children, teens, and young adults. Adderall is a composite type medication, which means it combines elements of two or more specific drug types. The composite substances that make up Adderall include Dextroamphetamine, or Dexedrine, and Amphetamine. These substances combined are believed to increase an individual’s focus, which is why it is widely prescribed to individuals suffering from Attention-deficit hyperactivity disorder also known as ADHD. However, because of the large amounts of amphetamines in the drug, it also comes with a high risk of addiction and dependency.

Adderall is a relatively new drug that burst into the market about 20 years ago. First prescribed as a diet suppressant, Adderall quickly evolved into an effective treatment for young adults and children who had been diagnosed with ADHD. As this drug started to become more popular and more widely prescribed across the country, individuals who did not have ADHD began to get their hands on it and soon found out for themselves the miraculous focusing power of the drug. After a few short years, Adderall was being widely abused among teens and young adults at high schools and college campuses all across the county. These young adults found that not only does taking Adderall help them focus while studying for exams, but it also allowed them to stay up for days at a time no problem.

While many people who abuse Adderall don’t ever set out to become addicted to the drug, before they realize it, it is often too late. Because Adderall is a stimulant it helps to heighten a user’s concentration, while inspiring motivation, giving people the ability to accomplish tasks quickly and to stay up for long periods of time. Also, many young adults have also found that if they drink alcohol while taking Adderall that it prolongs the effects of the alcohol, allowing them to drink more than they normally would be able to. However, this can often be dangerous and can cause lethal alcohol poisoning to individuals who are not careful. Currently, approximately 1.1 million people 12 years of age or older regularly abuse some type of stimulant, mainly Adderall. 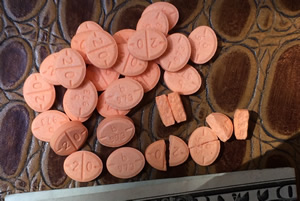 While Adderall is very effective for treating cases of ADHD, when used improperly it can have some very serious side effects. Adderall Addiction side effects include;

If you suspect your teenager is abusing Adderall, do not hesitate to speak with them right away about all the dangerous side effects of abusing this powerful drug and what treatment options there are available.