Demerol is an opiate pain medication that can either be taken as a pill, liquid, or a patch. Demerol works by binding itself to opioid pain receptors in the central nervous system and is used to treat moderate to severe pain. Demerol can also be used as a powerful sedative. Demerol is most effective when taken intravenously and the usual dosage is between 50-100mg by hypodermic needle, repeated every 1-4 hours as required.

Demerol, also known as Meperidine, was first synthesized in 1939 in hopes of creating a more effective Anticholinergic, which is designed to block acetylcholine in the central nervous system. Soon after its development scientists discovered its ability to treat chronic pain and was quickly marketed as one of the most effective pain killers in the market. However, because of its powerful pain killing properties, Demerol has the possibility to become extremely addictive (Demerol Addiction) and can cause long term physical and psychological dependency.

Demerol Addiction has several side effects including:

When Using Demerol Can Become Dangerous

While Demerol can be taken safely and responsibly, it can also be very addictive and habit forming. Like any opiate based drug, Demerol has the potential to cause physical dependence and addiction. Also, Demerol can be more addictive than some other opiate based drugs because of its fast action and the sudden rush of euphoria that is associated with the drug. Demerol should always be taken exactly as prescribed and should never be crushed up and snorted, chewed, injected, or mixed with liquid. Inhaling or injecting Demerol can cause life-threatening reactions including overdose and death.

Signs of a Demerol Addiction 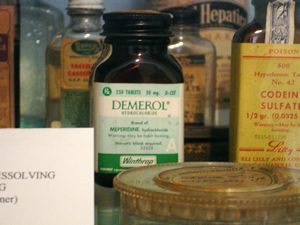 One of the two biggest signs of a Demerol addiction is an increased tolerance and physical withdrawal symptoms. An increased Demerol tolerance happens when patients suddenly notice that the standard dose they’ve been taking is no longer adequate in providing the necessary pain relief they’ve grown accustomed to. This is called an increased tolerance, and causes patients to take more of the drug to achieve the same desired result. This can not only be physically dangerous, but can cause long-term dependence and addiction.

Another key indicator of a physical addiction to Demerol is pain withdrawal symptoms. These include:

If you, or someone you love, is currently suffering from Demerol withdrawal symptoms do not hesitate to contact an opiate drug rehab facility right away. Here they can give you the necessary Demerol detox medication to help alleviate your withdrawal symptoms and get you on the road to recovery in no time.