The process of drug detoxification can sometimes be so slight that it can even go unnoticed, or so severe that you may need medical treatment. In rare situations where the individual may be in already poor health to begin with, drug detox could even be fatal. Drug detox can cause moderate to severe withdrawal symptoms that can include nausea, vomiting, depression, agitation, anxiety, the shakes, dehydration, and even seizures. Whether you’re detoxifying from a cocaine, alcohol, prescription drug or opiate addiction, it’s always the safest alternative to detox under some type of medical supervision, if possible.

The intention of any drug detoxification program is to purge the body of any toxins that have been accumulated during drug use. While this sounds like a simple enough process, it is usually anything but, especially for those addicted to cocaine and opiates. This is because, once the individual has completely stopped taking drugs for a short period of time, physical withdrawal symptoms can set in. The degree of severity of these withdrawal symptoms can vary depending on the drug and how often and long the individual has been using it. For some opiate addicts, withdrawal symptoms can last for a week, sometimes longer, and can be physically and mentally excruciating. Many opiate addicts will continue using drugs for more months, even years, just to avoid these terrible symptoms altogether. 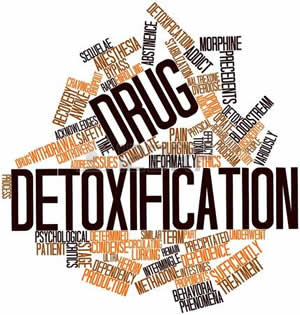 Since opiate detoxification can be one of the hardest detoxification processes to overcome, many are advised to seek out a detoxification medication like methadone or suboxone. While methadone has been the popular choice for many years, it also comes with several dangerous side effects. Some of Methadone’s side effects include slow, shallow breathing, hallucinations, confusion, chest pain, rapid hearth beat, as well as many more. Methadone also comes with the risk of physical addiction and dependence.

Instead of methadone, many detox doctors are now prescribing Suboxone, which is a similar type of medication, but has fewer side effects with a lesser risk of addiction and dependence. Another advantage about Suboxone is that after the first initial treatments, the rest of the treatments can be taken from the comfort of your own home. Suboxone also contains active ingredients that not only work to ease withdrawal symptoms, but help detoxify the body of any existing opiates. For more information on getting prescribed Suboxone, call us at (866) 531-4569.